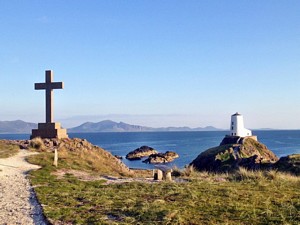 If you have never visited Newborough Beach and Llanddwyn Island, then you're in for a treat.

Just imagine walking through sand dunes to discover miles of golden sand, framed to the left by the majestic mountains of Snowdonia and the Lleyn Peninsula. To the right, and cut off at high tide, an enchanted island said to be the home of Saint Dwynwen, the Welsh Patron Saint of Lovers. Behind you, Newborough Reserve offers miles of forest trails, teeming with wildlife including red squirrels. 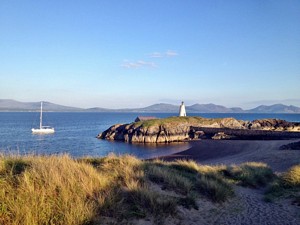 This can only begin to capture the essence of this incredibly beautiful part of Anglesey. The Blue Flag beach is large enough that it won’t feel crowded even during the hottest of summer days, and the gentle slope of the sand makes is perfect for children to play in the sea. It's little wonder that it was the Sunday Times People's Choice for "Best Beach"

The walk to Llanddwyn Island (or Ynys Llanddwyn to give it it’s Welsh name) will take about 30-45 minutes at a gentle walking pace, and it is well worth the walk.

The island has several beautiful coves, as well as shingle and sandy beaches together with incredible views. A variety of seabirds can be spotted from the island, as well as the seals – heads bobbing in the water, or basking on the nearby rocks. If you're lucky, you may also spot dolphins or even the occasional Minke Whale. 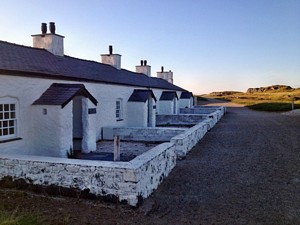 A small terrace of 4 pilot houses host a museum of local maritime history, built to house the pilots who guided ships through the treacherous Menai Straits, and who manned the Llanddwyn lifeboat until 1903. It is said that Prince Llywelyn who held his royal court in Newborough anchored his fleet off Abermenai Point. The ruins of this ‘llys’ or royal court were uncovered in 1996, and can be seen beside the road adjacent to the church on the drive from Newborough.

There are two towers on the island, the larger original lighthouse and the smaller which is a day-mark, marking the entrance to Pilot's Cove and which now displays the light. Wild ponies graze on the island throughout the year.

Llanddwyn Island is most famous for it's connection with Saint Dwynwen the Welsh Patron Saint of lovers. According to legend, Dwynwen, was a 5th Century princess, one of 24 daughters of the Welsh King Brychan Brycheiniog. She had fallen in love, but her father had promised her hand in marriage to another. Stories differ, but the outcome is the same in that Dwynwen prayed to be allowed to live unmarried, and lived as a recluse on Llanddwyn Island until her eventual death in 465 A.D. Her church on the island became a shrine in the Middle Ages, together with a well on the island which was said to predict the destiny of lovers depending upon whether fish swam in its waters. 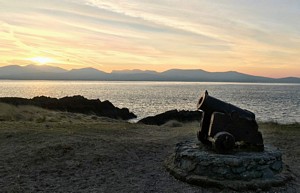 It is said that Dwynwen's dying wish was to be carried up to watch the sunset through a cleft in the rock which still stands to the north west of the ruined church to this day.

To reach Newborough Beach, turn left out of Cerrig y Barcud, and head up to the main Newborough Road at the top of the lane. Turn left and follow this road for about 5 minutes until you come into the small village of Newborough (Niwbwrch). Turn left at the crossroads (signed Traeth / Beach), and after around ½ mile you’ll reach a toll barrier. Pay £4, and then drive through the forest to the main car park. Park up and walk through the dunes to the beach.

There are toilets and showers in the car park, and during the summer months you will usually find ice cream and snack stalls.  Wrap up warm on winter days – whilst the wind blowing in from the sea makes the beach the ideal spot for kite surfing and a whole host of other lesser known sports, it can certainly take your breath away!