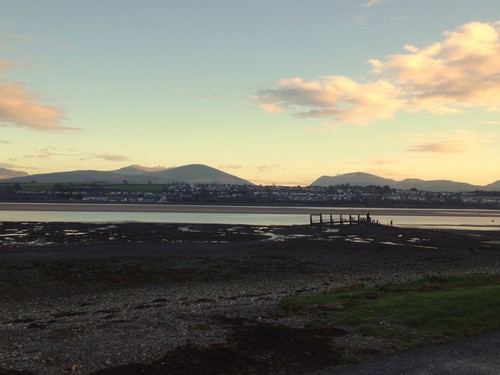 Taking a short stroll down the lane from Cerrig y Barcud Cottages, you’ll soon arrive at the Menai Straits. Looking across to the castle of Caernarfon, nestling at the foot of the mountains of Snowdonia, it’s hard to believe that almost 2000 years ago, these very shores bore witness to one of the Romans’ most brutal assaults on the British Isles, the Roman Invasion of Anglesey

The Roman invasion of the island they called Mona Insula in AD60 had been a long time coming.

Julius Caesar long harboured the desire to conquer Britain, but after two brief invasions in 55 & 54BC his attention returned to matters in Rome, and it was many years later in AD43 that Roman Emperor Claudius finally sent his legions for a full-scale invasion of Britain, led by Plautius. Within 4 years, his armies won control of southern Britain. After a decisive battle on the Thames, Plautius called for his Emperor who travelled to accept the Britons’ surrender and declare the island conquered.

This declaration may have been a little premature, and his legions were to fight for many more years on the British Isles. It wasn’t until AD59 that Wales was to feel the force of the Roman Empire.

It was in AD 60 that the Roman invasion of Anglesey was to take place, and it seems that the main motivation was in the significance of Druidism which was seen as a threat to the Roman Occupation. Anglesey was the spiritual home of the Druids, to which many had retreated as the Romans gradually moved north through Wales. So long as the Druids brought together individuals in a common focus, resistance to the Romans would remain, threatening the continued expansion of the Empire. It was important then, that the Romans destroyed the spiritual home of the Druids

Mona Insula had good farmland as well as copper mines providing a source of weapons. The sea provided good fishing, and lush pastures provided feed for livestock. Furthermore, the Menai Straits separating Anglesey from the mainland was treacherous, with strong tides, and quicksands.

The Roman Legionary was incredibly well equipped and skilled in warfare with two pilum (javelins) and his gladius (short sword) together with a shield which was used as much for attack in close combat as for defence. He also had personal protection in the form of chain mail (and later, segmented metal armour) and a helmet.

By contrast, the Celts of the Welsh tribes were essentially guerrilla fighters, hitting hard and fast before retreating, especially when the Roman’s reached the mountainous terrain of North Wales. Lightly armed with swords and shields, some carrying spears, few would have any sort of body armour.

Paulinus made his camp at Llanfairisgaer, near modern-day Caernarfon. He knew that his well trained and armed legionnaires could defeat the tribesmen and Druids if only he could cross the waters. He brought small flat-bottomed boats. Whilst his army crossed the Straits, they would be protected by Ballistae and Onagers (types of catapult) throwing rocks, stones and flaming missiles from the mainland across to the Island 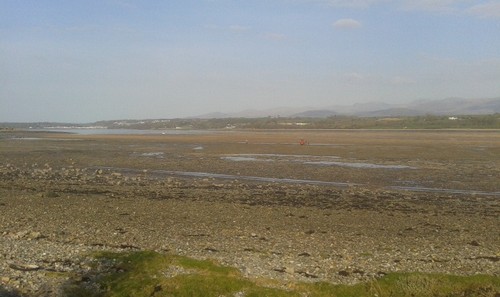 On the morning of the attack, boats were carried down to the edge of the water, and the catapults prepared. On the far bank, thousands of tribesman gathered to watch the Romans prepare. They would have shouted and jeered at the invading army, banging swords on their shields and sounding trumpets as the as the Druids chanted, invoking dark forces. The Roman Write Tacitus describes how

"On the beach stood the adverse array, a serried mass of arms and men, with women flitting between the ranks. In the style of Furies, in robes of deathly black and with dishevelled hair, they brandished their torches; while a circle of Druids, lifting their hands to heaven and showering imprecations, struck the troops with such an awe at the extraordinary spectacle that, as though their limbs were paralysed, they exposed their bodies to wounds without an attempt at movement”

Even Paulinus' hardened legionnaires were said to be terrified, and he is believed to have roused them into a frenzy, reminding them of their honour as Romans. As the tide reached the right point, the boats were launched and the cavalry swam their horses across the waters. Boats will have been capsized, and many soldiers drowned in the Straits on the way over, but inevitably the legions will have begun to reach the shore.

Look around today at the shallow shore, and the gentle sloping land leading away from the water, and you can begin to imagine thousands of heavily armed Roman Legionnaires emerging from the Straits, throwing their lethal pila, and then forming into lines for the type of close combat that had defeated every enemy that came against it as the Roman empire expanded across lands so far from Rome.

The Celts would have been faced with an almost impenetrable shield wall from which Gladius stabbed and slashed as they began a slaughter of the tribes that stood against them. It is said that the Romans spared no-one that day as men, women and children were massacred whilst many Druids were burned alive in their sacred groves.

Little remains to this day to testify to what was one of the bloodiest campaigns in the Roman occupation of Britain.

Paulinus’ occupation of Anglesey was short-lived. His concentration of troops in North Wales had left the rest of Britain vulnerable, something not lost on the Iceni tribe, led by Boudicca whose revolt began in East Anglia. She led them to destroy the Capital of Roman Britain in Colchester, followed by London and St Albans, before Paulinus returned from Anglesey to put down this revolt 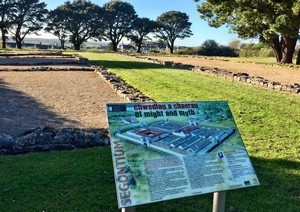 It was 78 AD before another Roman general, Agricola, returned to the Menai Strait. He had fought under Paulinus in the original invasion of Anglesey, and this time captured the island in a single, sudden attack. His troops took the islanders by surprise by swimming across the Straits and wading ashore. This time the islanders had no choice but to surrender. Anglesey was at the far west of the huge Roman Empire, and was governed by an impressive fort at Segontium on the mainland. The remains of this can be seen though much of the stone was used by Edward I to build his castle at Caernarfon

Two recent excavations have taken place at Tai Cochion (just as you turn away from the Straits on the way to Brynsiencyn). These have discovered the remains of 25 Roman buildings, a kiln and a roadway 8 metres in width, suggesting that there was a Roman settlement on this side of the Straits, or possibly a centre of trade between the Romans and the local people. 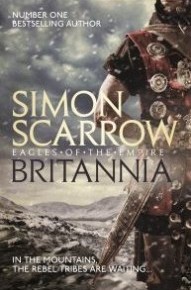 There are many factual resources which will provide more detail of this, and other Roman history. If you enjoy Historical Fiction, then we'd really recommend Simon Scarrow's accounts of Macro and Cato's battles across the Roman Empire. At the time of writing, the latest one, Britannia tells of a failed attempt by a Legion to cross the Straits onto Anglesey some years before Paulinus' successful invasion. It's set in the same location just at the bottom of our lane, and the book is even more enjoyable being able to picture the landscape, even if it has changed somewhat in the last 2000 years!